After an action packed first half day in Glastonbury, I woke up ready to see how much I could tackle given a full day in and around town. The short answer? A LOT.

After breakfast, I went straight to Glastonbury Abbey which was founded in the 7th century and lasted until Henry VIII got his hands on it in the 16th. I loved walking around the Abbey grounds largely because even with the majority of buildings in ruins, it was easy to get a visual of how expansive the grounds were. Growing up, my favorite books were the Redwall series by Brian Jacques, but despite his beautiful descriptions of Redwall Abbey’s grounds, inhabitants, and all the things that took place inside the walls it was hard to imagine the true scale (plus, being written about animals it was hard to get the conversions right: if an abbey holds x badgers and y mice plus z additional species, what does that look like in a human equivalent? These are the big questions I have). I stepped onto the Abbey grounds, saw the chapels, the abbot’s kitchen, the dormitories, the ponds, and the orchard and finally GOT it.

As is standard, I wandered around in circles, taking in as much as I could. Highlights included the whale jawbone casually on display over a similarly arched door, seeing the site of the supposed grave of King Arthur and Guinevere, feeling like Dorothy in the Wizard of Oz as I RAN through the orchard having realized that the path I needed had large, regularly falling apples that I REALLY didn’t want hitting me on the head, and laughing to myself on one of the woodland paths as I passed a sign about the local badger population, which was surrounded by mushrooms. It was maybe the only time in my life I wish I had seen a snake, and then I really would have lost it.

This was another place I remembered seeing good reviews for, so when I passed by and noticed they had a caramel slice on display, well, how could I not stop? Absolute bliss. I generally make it a point of trying all the caramel shortbreads I can, for scholarly comparison purposes, of course, and this was a great one. 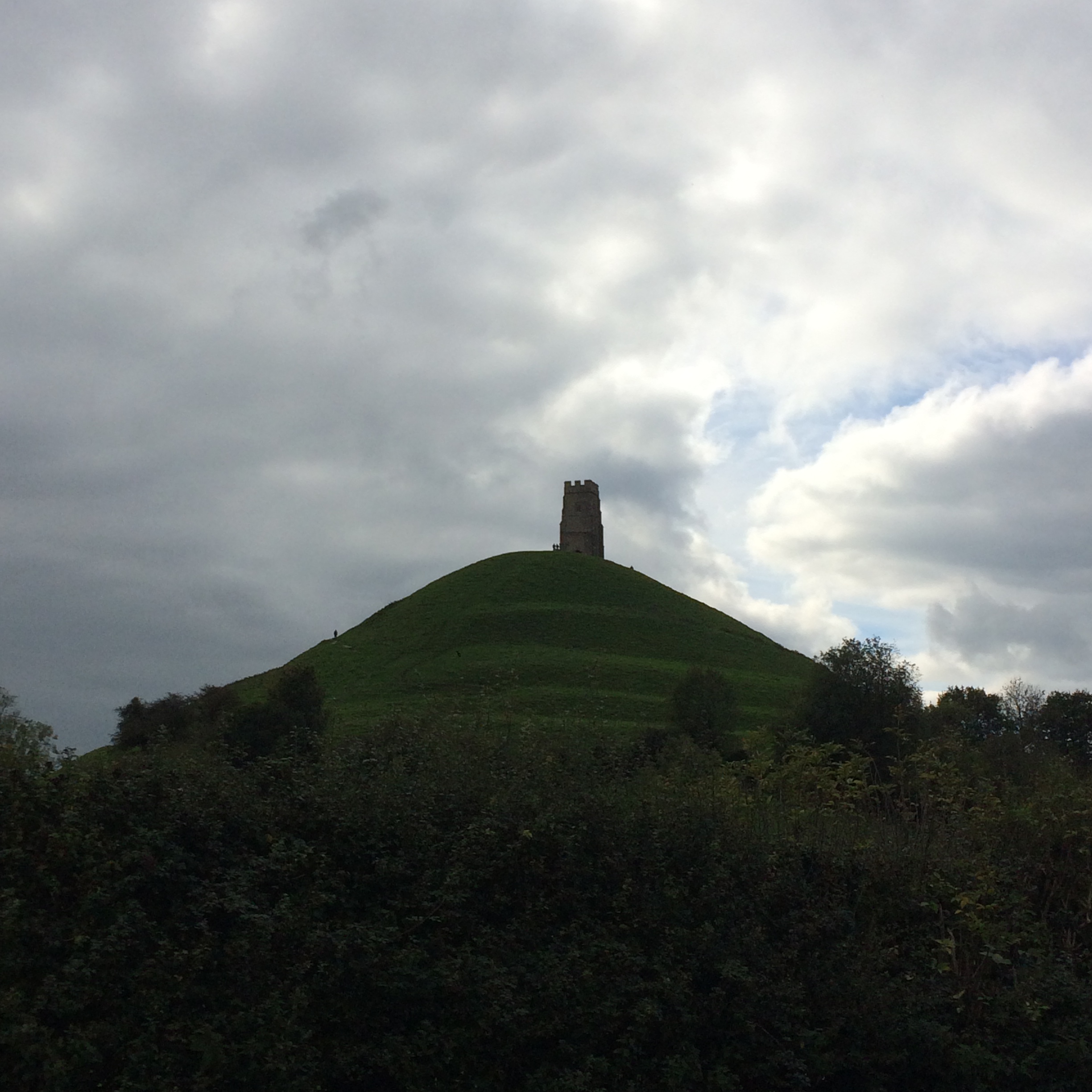 I wanted to see the Tor from ALL angles, so I walked around to the back and found the other path to the top. I wasn’t really planning on going all the way up, but then I saw that the path took me through a field of sheep and past Avalon Orchard, so I thought maybe I would just go halfway.

But once I was halfway up it seemed silly not to keep going so I continued on to the top. It was another beautiful day and I found a sunny spot to sit in while a huge number of ladybugs flew around and made themselves comfortable on whatever part of me they found first. It was…unnerving, but not horrible and another magical moment on the Tor. This was honestly one of my favorite parts of the trip. At the base of Wellhouse Lane, close to where it meets Chilkwell is a fairly unassuming stone building that had a decent sized group of people outside every time I passed it. As I got close this time, a man broke away from the group and asked if I was looking for the White Spring, the calcite-rich sister spring to the Red Spring of Chalice Well, which is across the street. When I said yes, he told me to follow him which I did, after only briefly wondering if this is how I get murdered, and he led me down the dark damp steps into the cavernous building. Inside, it is only lit by candles, there is a giant pool in the middle of the large single room, and each corner is filled with decorations and offerings forming small chapels. The man pointed out which corner housed the masculine energy and which housed the feminine energy, encouraged me to wander freely, and reminded me not to take pictures. I peeked into each of the chapel corners, and then went over to the furthest corner which has a series of tiered pools with the spring at the top. Just about the time I was wondering if I could climb the tiers to see the spring and how likely I was to fall in, a man emerged from the water of the highest tier. Naked. Then he started to jump down lightly and gracefully from tier to tier and then I realized that I probably should not be staring so I quickly retreated to a small stump next to the main pool to sit and contemplate my life and how I was currently in a dark, underground cave with naked strangers. Mom would be so proud.

As I was sitting there, the man who had initially shown me in came over, and after very nicely asking if I was meditating or up for talking, grabbed a nearby stump and gave me the history of the spring. The cavern in its current form has actually only existed for about 12 years, but when the building formerly occupying the space closed, he and his friends asked the owners if they could open it up and so built the different pools that are there today. He told me how the space is technically non-denominational, but that groups from all sorts of backgrounds and beliefs are drawn to the spring and its accompanying energy and many have performed rituals in the large central pool. Most amusingly, there was once a group of women performing a ceremony, naked, at the same time a group of school children were brought in for their own educational purposes and apparently the looks on their faces were priceless. I could relate!

My favorite part of the conversation though (aside from him telling me I didn’t sound American and he thought I could be English!) was talking about how interesting it is that so many people find this place and find that it suits their very different spiritual needs. “I guess it speaks to everyone in its own special way,” I said. The man stopped, turned to me very seriously and said “No. It doesn’t speak at all. It’s a spring.” The pure, pragmatic matter-of-factness of that statement in contrast to the setting of candles, altars, and reverent silence – from the person who had helped build those things, no less! – was an absolute delight.

After we finished talking, and after I confirmed that there were no more surprise naked men, I did in fact make it up a few tiers towards the spring at which point I did in fact trip and almost fall into the pools. I decided that maybe I had had as much of the White Spring as I could handle, found my way back to the stairs, and reemerged into the daylight.

Could I really spend time in Glastonbury and not stop at a café called Excalibur? It focuses on plant-based, organic food and drink, which I did not actually consider as I walked in and asked for a latte. The non-dairy milk options are almond, cashew, hemp, or tiger nut. I tried the tiger nut, and while I don’t think I’ll actively seek it out again, it wasn’t bad and I loved the atmosphere of the place. 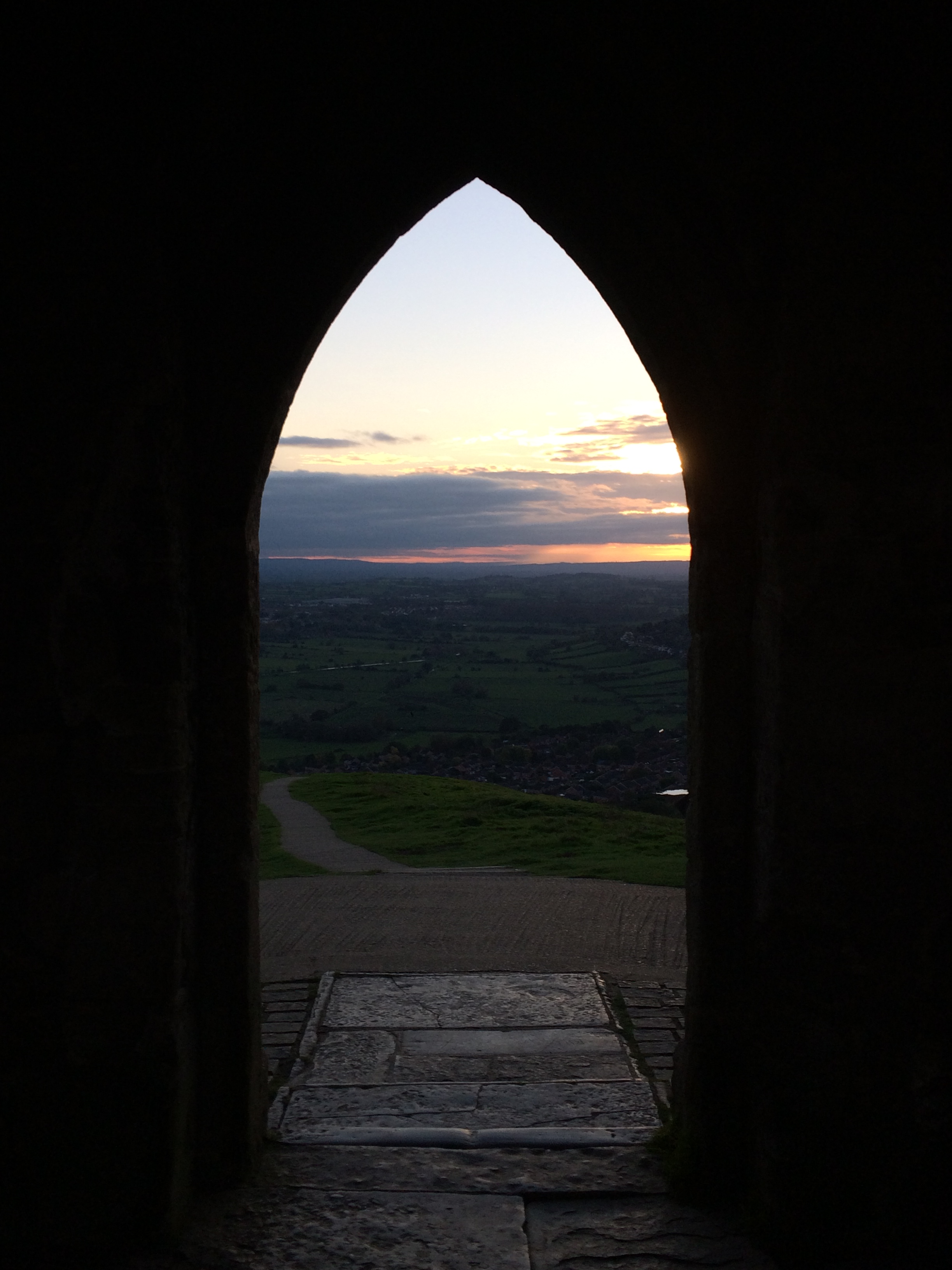 Yes, I hiked up Glastonbury Tor twice in one day, but I really wanted to see it at sunset. My legs may not have been thrilled but the view was incredible and my soul was happy. It was the perfect end to my full day in Glastonbury. 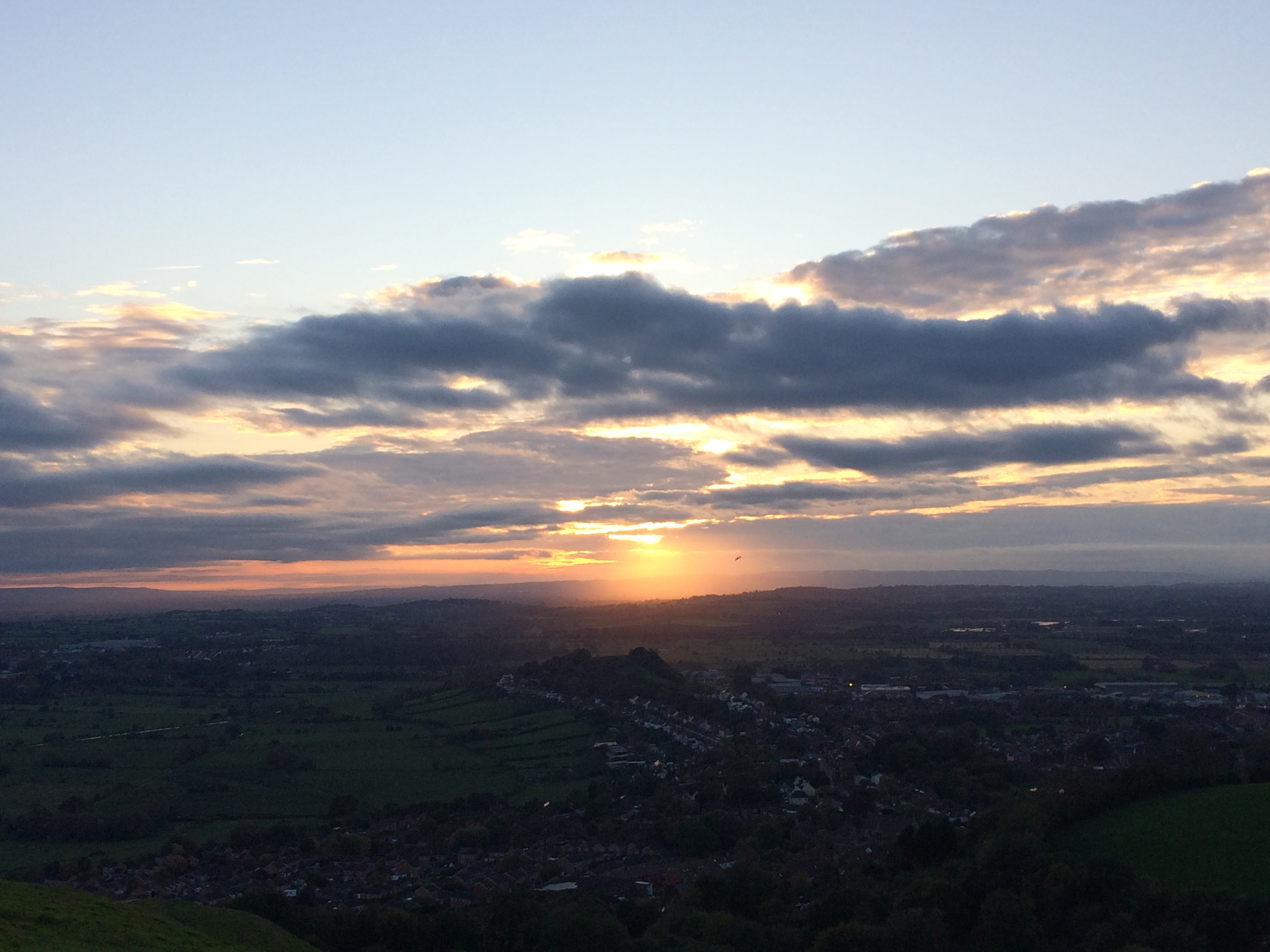 My B&B owner, Mark, told me that for a good, quality fish and chips I couldn’t go wrong with Knight’s, right in town center. It has a takeaway and a restaurant and I chose to sit in with a classic fish and chips and a local cider. One really cool feature of Knight’s is that you can request how you would like your fish fried – soft, crispy, light batter, heavy batter, etc and the same with the chips. I chose to go with whatever is their standard, but I thought that was a really nice option you don’t often see for people who have strong batter preferences. It was just the right kind of meal to finish off a whirlwind day and gave me just enough energy to once again drag myself along the short walk home and just barely make it into bed before absolutely passing out.