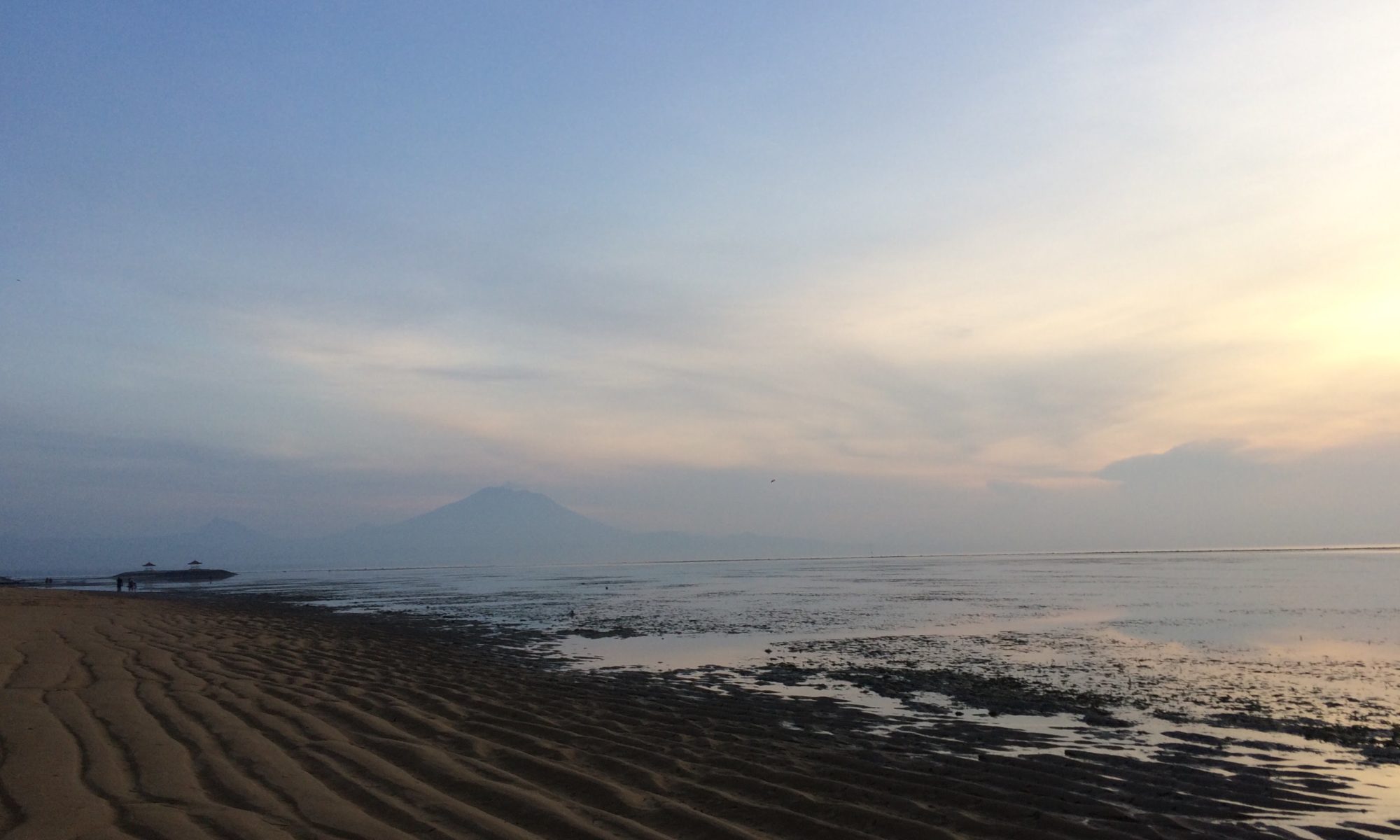 The airport in Bali was just chaotic enough that if I was tired from my flight (I was), I forgot all about it as soon as I entered the arrivals area, where I snapped into high alert. There were palm trees! And it was so blissfully hot! But also, there were people EVERYWHERE: fellow travelers swarming along, a wall of people with signs waiting for passengers, and even more people asking if those of us without prearranged rides needed taxis. I was sort of prepared for this and kept a firm grip on my suitcase handle, repeated “No” in my most serious tone, and kept my well-practiced RBF (also known as my “neutral”) in place.

Originally, C and I had planned to meet at the airport, but a combination of flight delays and poor reading comprehension meant that we would actually be arriving several hours apart, and that I would be arriving first. C passed along all the information that I could possibly need, from the hotel name to the approximate cost of a cab to get there (200,000 IDR, or around $14USD), and told me that if I wasn’t comfortable braving the cab line by myself, I could grab a coffee (or six) and wait for him. But I had been traveling for about 24 hours and the idea of spending another second, let alone hours, in an airport was not something in which I had any interest. So, after standing to the side getting my bearings for a few minutes, I figured out exactly where the cab line was and walked with a purpose over to it.

Now, I am not a natural haggler. I tend to trust that the price I’m given is the actual price instead of the opening bid. But C and the internet had told me that this would not be the case in Indonesia, and especially not in the airport taxi line, so I steeled myself for negotiations.

The man at the desk did not say anything, just waved me to another man standing a few feet away with a look that very much said “your problem.”

“200,000,” the second man said. I readily agreed, seeing as that was the amount C had told me to aim for, and proceeded to feel very self-congratulatory, letting my superior negotiating skills go straight to my head.

Of course, it wasn’t actually that easy. Having agreed on the price, we now had to figure out exactly where I was meant to be going. The hotel was Puri Kesari Guest House, but it is fairly new and there is another hotel in the area called Puri Mesari (about 2.5 k away, I later found out). “That’s the one you want,” my driver said. I argued that no, I was sure it was Puri Kesari and furthermore, I had the address. He started to type the name into his Google maps, but autocorrect suggested Puri Mesari and he said “See? Mesari, not Kesari. Ask your friend, but I know it’s this one.” I argued, again, that I had the address RIGHT HERE so all he needed to do was take me there, and…he pulled over, suggesting in a way that did not actually sound like a suggestion that I either call C, or we go back to the airport since I was clearly wrong. Around that point it occurred to me that since I was relying on wifi, I had no way of contacting anyone while I was in the cab, and that even if I had service, C, the only person who knew where I was and where I was meant to be, was currently in the air without any service of his own. If I were in a movie, this would be the scene before they start negotiating fees with Liam Neeson while drafting headlines along the lines of “American girl should have known better.”

It seemed for a second that we were at an impasse, but my driver had not actually counted on how stubborn I can be, especially when all I want is a hot shower after flying halfway around the world. Even though I knew that if I got desperate I could go back and wait for C, my pride was certainly not going to let me admit defeat so early in the trip! I may or may not have demanded that the driver give me his phone at which point I put in the address, prayed I had copied down the right one, hit “search,” watched to make sure a route (any route!) came up, and said “go there.” Finally, begrudgingly, he went.

Thirty minutes later, we were making our way down the tiniest, windiest roads, backing up awkwardly for dead ends, scooters, and stray dogs (that I had no intention of petting!) and the driver was mumbling under his breath about how none of this was right. I was sitting quietly in the back thinking about how it was going to be really annoying if I was actually wrong and had dug my heels in for nothing, when we turned a final corner and there it was: Puri Kesari Guest House. “I guess this might be it,” my driver conceded, as I BURST out the door, praying that the front desk had my name. Thankfully, I didn’t even have to ask – there was a white board behind the desk and I could very clearly see that they were expecting me. I triumphantly told the driver that I WAS RIGHT, paid him, and exhaled, having officially arrived. Thank you, Mr. Neeson, but we have no need for your particular set of skills at this time.